This essay seeks to present a theology of hope in the midst of tears. I will focus on the Book of Lamentations, highlighting different human responses to the theopolitical catastrophe in 587 B.C., the fall of Jerusalem. My points are simply: there was no comforter, no prophet, and no hope. I will simultaneously point out significant correspondences with Palestinian and Middle Eastern catastrophic realities. Last, I will present important lessons that Christians need to consider in their prophetic imagination.

During the last few years and in light of the realities in the Middle East, I have been studying the Book of Lamentations. The similarities of pain shocked me and I was moved to write the following poem:

I had many existential questions. What do we say or do when our cities collapse and hunger invades our streets? How do we respond when homes are destroyed and young children are brutally killed? What do we do when the teeth of evil are like nails from hell penetrating our souls? Why is God absent when the civic and moral infrastructures of our society collapse? Why does God forsake us when our holy places are defiled and our religious symbols are despised? The Book of Lamentations hosted my feelings and helped me to express my frustrations.* It says: “Streams of tears flow from my eyes because my people are destroyed. My eyes will flow unceasingly, without relief, until the Lord looks down from heaven and sees. What I see brings grief to my soul because of all the women of my city” (Lam. 3:48–51, NIV).

There is no doubt that the Book of Lamentations is a place full of sorrow, sadness, and salty tears. This book is very relevant to our Middle Eastern situation. It can be a founding stone for our theology. My assumption is that the destruction of Jerusalem during the times of Jeremiah is similar to the Al Nakbah war in 1948 and to the series of catastrophes that some Middle Easterners experience today.* Based on the Book of Lamentations, I will highlight three areas: there is no comforter, there is no prophet, and there is no hope.

First, there is no comforter.

The Book of Lamentations points out the destruction of the socio-religious infrastructure of ancient Israel.* The text describes the besieging of Jerusalem, its famine, its invasion by a powerful army, the execution of its leaders, the exile of its people, the looting of its religious places, and the collapse of any hope. It simply states that there is no comforter. The Book of Lamentations keeps repeating this statement: there is no comforter (Lam. 1: 2, 9, 16, 17, and 21). It states that no one can help the people to deal with their pain and pitiful realities. No one is showing them mercy or compassion or offering them encouragement and hope in the midst of their trouble. There is no comforter for Palestinians or Syrians or Iraqis or other nations in similar situations. Israelis are not going to resolve their problems. Neither the Arab world, nor the European world, nor the Islamic world, nor the United Nations are going to help them. The world has abandoned them. There is no comforter. We therefore lament.

Second, there is no prophet.

The text says that “the law is no more, and her prophets no longer find visions from the Lord” (Lam. 2:9, NIV). God is silent and people are suffering. This has led to many reactions. Some rightly ask: where is God? No doubt that many people in the Middle East rejected God because he did not protect them. As a Christian I prefer to accuse God instead of boycotting him, or eliminating his existence. Some believed that God had rejected them. The Book of Lamentations starts with a question about the suffering of the city, but ends with a question about the endurance of the rejection of God. Some preferred the path of self-pity, adopting a victim mentality that wants all people to see their pain (Lam. 1:12). Some preferred the path of revenge (Lam. 1:22; 3:64). They dehumanized their enemies in order to facilitate destroying them.

However, we as Christians cannot abandon the logic of love that prompts us to seek justice without abandoning the human dignity of all the inhabitants. Revenge is not our path.

Third, the Book of Lamentations depicts a reality in which there is no hope.

It reminds us of Dante’s Divine Comedy in which he wrote about the sign on the gates of hell. It says: “Through me you pass into the city of woe… All hope abandon ye who enter here.” * In Palestine, Israel, Syria, and many other countries in the Middle East, we have an impossible task as we seek to find a political hope.

However, the Book of Lamentations points out that hope does not depend on the circumstances but on seeing the divine perspective.

The existence of a prophetic vision is indispensable for the existence of hope. Gladly, the Palestinian Kairos Document has a prophetic voice following in the footsteps of those who affirm faith, hope, and love (1 Cor. 13:13).* In First Corinthians, the literary unit of these three virtues is chapters 12–15. It concludes with a strong message of hope rooted in the resurrection of Jesus Christ. Furthermore, we follow in the footsteps of Saint Augustine. In his Enchiridion, or Handbook, he points out that hope is born out of faith.* Hope cannot exist without faith. He adds that “he who does not love believes in vain, even if what he believes is true; he hopes in vain . . . unless he believes and hopes for this: that he may through prayer obtain the gift of love.” * Love unites us to God.* Love does not mean abandoning justice but it does mean pursuing justice with the logic of love, not with revenge. Good hope cannot exist without faith and love. In the Book of Lamentations, the text says:

Yet this I call to mind and therefore I have hope: Because of the Lord’s great love we are not consumed, for his compassions never fail. They are new every morning; great is your faithfulness. I say to myself, “The Lord is my portion; therefore I will wait for him.” The Lord is good to those whose hope is in him, to the one who seeks him; it is good to wait quietly for the salvation of the Lord (Lam. 3:21–26, NIV).

This hope is confirmed and embodied in the Book of Acts. God inflicted pain on Jerusalem in the Book of Lamentations, and first century Jerusalem revenged by killing the Messiah of Israel. However, the triune God ended this cycle of violence through faith, love, and hope. The Father loved us and offered his only begotten Son on the cross. The Son wept over Jerusalem and suffered at its hands but he forgave and embodied the path of love. Then the Holy Spirit came to Jerusalem. The Holy Spirit is the Comforter that will end our exile from God and will grant us a prophetic vision not rooted in an ethnocentric reality and neither limited to one group, whether Greeks or Hebrews. Instead, we are witnesses and prophets to the whole world (Acts 1:7–8). Middle Eastern Christians are walking in the footsteps of the early church advocating faith, love, and hope. Hope is accessible to all those who call upon the name of the Lord (Acts 2:21).

Our witness is indispensable if the church is going to continue to embody the power of biblical faith, love, and hope to Muslims, Jews, and other faith communities. The multi ethnic church continues to be God’s hand to help the poor, challenge oppressive powers, fight discrimination, and spread the comfort of God to the ends of the earth. We are a sign of hope.

Some important lessons for Christians

1. We can cry in the midst of catastrophes.

Lamenting is not hopelessness, but it is human, and it helps us to maintain our humanity as we mourn with those who are mourning. But let us cry together and let us cry as an expression of commitment to pursue justice and human dignity with the logic of love.

2. We will not abandon good hope.

Those who abandon hope will also abandon the pursuit of justice. A bad hope will lead to a suicidal revenge, but a good hope will remind us of God’s mercy and remind us that we are covenant creatures and his people. Christians are a covenant people who can expect the blessings of God despite the forces of death. The structures of injustices shall eventually collapse because Babel shall fall down and heavenly Jerusalem shall come down.

3. We will commit ourselves to faith, hope, and love.

Our hope is not wishful thinking, or optimism, and is not founded on the typhonic political atmosphere. It is founded on the nature of our God who conquered death, established the church of the martyrs, and promised to be with us. Hope is the bridge that will help us to move from the current reality to the hoped for reality. It is a force of change that re humanizes people who have been slaves to the forces of dehumanization. It can only be good change when it is accompanied by faith and love and submission to the Holy Spirit. It is not a surprise that our Middle Eastern prophetic voices insist on human dignity from the perspective of faith, asserting that all human beings are created in the image of God, affirming the logic of love, and choosing good hope.

[1] Many other contemporary scholars had a similar experience with the Book of Lamentations at harsh times. See for example, Adele Berlin, Lamentations (The Old Testament Library. Louisville: Westminster John Knox Press, 2004); or Kathleen O’Connor, Lamentations and the Tears of the World (New York: Orbis, 2003); or Collin Chapman, “A Lament over Lebanon,” available online: http://www.batrneoconwatch.blogspot.co.il/2006/08/lament-over-lebanon-by-rev-colin.html; accessed on Dec 1, 2016.

[2] In the Septuagint and Latin versions, the book of Lamentations starts with an introduction that points out that Jeremiah is its author. In the Syriac version, we have four lamentations followed by a prayer by the prophet Jeremiah. Furthermore, many church fathers, the Talmud, Luther, Calvin, and others argue that Jeremiah is the author of the pertinent book. See R. Salters, Lamentations (International Critical Commentary; New York: T. & T. Clark International, 2010), 5.

[5] “The Palestinian Kairos Document: A Moment of Truth: A Word of Faith, Hope and Love from the Heart of Palestinian Suffering,” 2009, http://kairospalestine.ps/index.php/about-us/kairos-palestine-document. 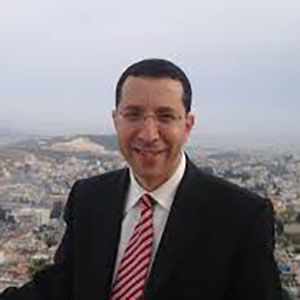 is currently a full Professor of Biblical Studies and Academic Dean at Nazareth Evangelical College. He is a Palestinian Israeli evangelical who studied at Bethlehem University (B.Sc.), Wheaton College (M.A.), and Trinity Evangelical Divinity School (M. Div., Ph.D.). Katanacho is an Honorary Vice President of IFES. He has authored many books in Arabic and English. His full bibliography is available on www.katanacho.com.