This year saw the release of Martin Scorsese’s long-awaited film of Japanese novelist Shūsaku Endō’s book Silence. The novel tells the story of two seventeenth century Jesuit priests who travel from Portugal to Japan to locate their missing mentor, Father Ferreira. Rodrigues travels to Japan knowing that a great persecution has virtually eradicated the Christianity that had been planted in the 16th century. He is keen to make contact with whatever Christians remain, and to discover what happened to Father Ferreira, a missionary who is said to have apostatized.

Rodrigues witnesses the martyrdom of two local Christians, Okichi and Ichizo. They are tied to stakes in the surging tide, and left to die of exhaustion. Rodrigues writes:

They were martyred. But what a martyrdom! I had long read about martyrdom in the lives of the saints — how the souls of the martyrs had gone home to Heaven, how they had been filled with glory in Paradise, how the angels had blown trumpets. This was the splendid martyrdom I had often seen in my dreams. But the martyrdom of the Japanese Christians I now describe to you was no such glorious thing. What a miserable and painful business it was! The rain falls unceasingly on the sea. And the sea which killed them surges on uncannily — in silence. (pp. 103–4)

Rodrigues had long experienced the veneration of Christian martyrs, and expected to see ‘splendid martyrdom’. Instead, it was a ‘miserable and painful business’. In reality, the torture and suffering of Christians was grotesque and dehumanizing. It was, instead of a foretaste of heaven, an experience of hell.

Rodrigues senses not the presence of God in these events, but his absence — his silence.

Why has the God and Father of our Lord Jesus Christ forsaken those who are willing to die for him? Why does he not rescue the Christians who were executed by beheading on the Libyan coast, or the Syrian Christian women who are fleeing for their lives, or the Nigerian Christians who are bombed as they gather to worship on a Sunday, or the North Korean Christians languishing in labour camps? What Endo helps us to see is that there is no romantic gloss to their suffering.

Dying for Christ does not make physical degradation any less than what it is. Pain is still pain. The fear of death and dying is still real. There is no beauty in agony.

We need to see this again, because, like Rodrigues, Christians have a tendency to depict martyrdom as a kind of holy suffering, fairly glowing with the radiance of heaven. We have long celebrated and honoured the martyrs because they have been God’s present to his people. They’ve demonstrated in their suffering for the name of Christ what every Christian’s life is like: a dying to self and rising to new life. But the glory of martyrdom isn’t on the surface and obvious to all. It is hidden from view, and only visible to the eyes of faith. We see this in the book of Revelation, which takes us behind the scenes of history itself to the deeper reality of the events. John sees Rome as a beast not because it looks like a beast as a matter of fact. Indeed, it doesn’t! If you were to read everything from its surface appearance, you would think that the church is a doomed project. You would see Rome succeeding in stamping out Christianity. You would see the blood of the martyrs as just blood, congealing in pools on the floor of the arena. And you would hear the deafening silence of God. Surely this is a God-forsaken people, pitiable beyond others? Surely, we could taunt them as Elijah taunted the prophets of Baal — is your God too busy, or asleep? Has he got a poor memory? Out to lunch maybe?

We should at least, as Endo does, pause here and feel the sharpness of the question.

Especially we who do not live under the threat of persecution should try for a moment to imagine what it is like to pray for release from a terrible fate but have no response.

But it is the cross of Christ which is the pattern for all Christian suffering and also its hope. The glory of Christian martyrdom is revealed to us because it points to the glory of God revealed in the face of the suffering Christ.

That too was a hidden glory. It was glorious not because of Christ’s courage, or his nobility, or his endurance. Jesus’s suffering was at the hands of petty, ruthless, and cruel individuals. What people saw when they witnessed his death was that it was either ridiculous or pathetic. They scoffed and mocked, because it seemed so futile. Even as he died, Jesus cried out to the sky, Eloi, eloi, lama sabachthani?, which translates as ‘My God, my God, why have you forsaken me?’

The death of Jesus of Nazareth was glorious because God declared it to be. The resurrection of the Son of God from the dead overturned the persecution of Jesus’s persecutors. Their verdict against him did not stand. It was not that Jesus’s principles lived on, or his memory, or that his death inspired a movement. It was that Jesus himself now lives, in the glorious body given to him in the resurrection. God is not in fact silent. He has spoken over Jesus Christ, and declared him innocent.

Christian martyrdom does not come with an anaesthetic. It is not spared grief, pain, despair, or doubt. It is ugly. It journeys through hell itself. But it is empowered by the resurrection of Jesus Christ from the dead. If the rejection of Jesus by the world was itself rejected by God, then those who suffer and die for his name likewise know that they are encompassed by the saving mercy of God. In the book of Revelation, the martyrs are robed in white, the colour of victory (chs 6 and 7), because they have washed them in the blood of the Lamb.

The testimony of the martyrs is not just for those living under the threat of violent persecution. It is for those Christians who get to live in comfortable homes and work in air-conditioned offices just as much. The Christian life is cross-shaped. As Dietrich Bonhoeffer once said:

“The cross is laid on every Christian”

— and that includes the ones who do not face being killed for their faith. Christian martyrdom shows us the Christian life is always and everywhere a dying to self — and that the glory of this dying to self is very much hidden. Our small, everyday moments of saying ‘no’ to the world or of carrying the burdens of others or of pouring ourselves out in service are not often applauded. The cost of them to us, if not as great as dying itself, is tangible. The Christian life hurts.

And yet this everyday dying to self is met on the other side by a rising to new life. In Christ, by faith, we are not condemned. Rather, we are called forth into the freedom of a new hope and purpose, to do his works in the world, to the glory of his name. 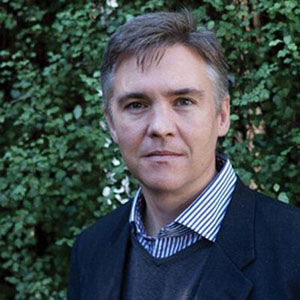 is currently Rector of St Mark’s Anglican Church, Darling Point, in Sydney, Australia. His doctorate from Oxford University was published in 2010 as Martyrdom and Identity: The Self on Trial. He taught for several years at Sydney’s Moore Theological College and has published other books, including My God, My God: Is it Possible to Believe Anymore? and Is Forgiveness Really Free? He lives in Sydney with his wife Catherine and their four children, and enjoys cricket, cheese, and Bach.