For the last thirty years or so, northern Nigeria has seen a series of riots, persecutions, and destruction. Sometimes whole families or communities were decimated; sometimes it was individuals who just happened to be in the wrong place at the wrong time, and who refused to deny Christ, choosing rather to be killed. In the vast majority of instances, the names of these martyrs will be known and remembered only by their close relatives — and by the Lord. Some were those who were working for peace and reconciliation between Muslims and Christians; some were pastors; many were church members.

Those who carry the message of the gospel will not always be welcomed; there may be intimidation, persecution, humiliation, and suffering. St Paul knew all of these, but he refused to give up. He searched out people of all faiths: Jews, worshipers of pagan idols, and those who served an “unknown god”. Always, under all circumstances, his concern, his aim, his reason for living was to “press on” with this gospel:

“Not that I have already obtained this or am already perfect, but I press on to make it my own, because Christ Jesus has made me his own” (Phil 3:12, ESV).

The gospel had so caught and transformed him, that he knew that no person, situation, or circumstance was beyond its power. It is the power of the gospel which has been given into our hands and into our hearts today. To bear witness to the love of Christ is not primarily a matter of academic debate, of round table discussion or even of media bombardment. It is simply living the gospel of Christ in the power of the Holy Spirit, day in and day out, in such a way that others see, are challenged, and are surprised.

To bear witness to the gospel in this way means dying to self and living for Christ. In his first epistle, Peter writes to encourage, to reassure, and to bring hope to the Christian churches in Asia Minor as they begin to face the storms of persecution. The letter instructs us and points us to the basis of our faith: Jesus Christ, our hope, now and forever. Peter points to the glory of God’s calling: Christians are God’s chosen people, heirs of God’s blessing — but Christians are also called to suffer, to endure unjust abuse and undeserved persecution. This is our calling because it was Christ’s calling, and we are called to follow his example (1 Pet 2:21). Christ suffered for our sake, and as we follow him, we suffer for his sake and for the sake of bringing others to know him.

Peter seeks to encourage believers not only to remain steadfast in the face of suffering, but also to examine the reasons why they must live in a troubled world and endure suffering and persecution, bearing in mind that Jesus suffered vicariously for the sins of the whole world and thereby achieved salvation for us. It is one thing to suffer due to ignorance, foolishness or deliberate personal sin and transgression. It is yet another thing to suffer innocently for righteousness’ sake. Each believer must examine carefully and truthfully the reasons for his or her suffering and see if it is worth it. Any suffering which does not lead people to Christ and bring blessing to people is not worth it.

Any suffering which is not for the sake of Jesus Christ and the gospel of salvation is not worth it. Any suffering that has no eternal value before God is utterly useless. Even if you are suffering through a sickness you did not inflict upon yourself, it will be important that you cast all your cares and burdens on Christ because he knows you, he knows your condition and he cares or you (1 Peter 5:7).

Otherwise you would have lost, fatally. This needs to be pointed out clearly to debunk the idea that passively accepting a state of suffering is a sign of being a believer. Some have even gone further to regard unnecessary, undue, and even senseless suffering as being a mark of a genuine faith. Nothing could be further from the truth. Jesus Christ did not come in order to make us suffer: he came to bring hope and a way through the troubles of this world. The world’s troubles are real and not to be ignored. God has never promised his people that they would escape all trouble, but he has always promised to go through the troubles with us. Jesus said: “In the world you will face persecution. But take courage; I have conquered the world” (John 16:33, NRSV).

The suffering of Jesus Christ was because he confronted the powers of hell, of death, and of Satan himself. He suffered, but he had to do so in order to rescue a people from death to life, from darkness to light, from hell to heaven. He suffered to set on course an irreversible trend of transformation of history, people, lives, and communities. God loves the world and humanity so much that he could not leave us in sin for ever. The direct practical implication is that whoever is going to become involved in redeeming the world must face bitter confrontation and even death. Jesus literally went through all this so that today we are the direct beneficiaries of this huge price that God had to pay as his only Son suffered and died our death. The fact in all this is that Jesus rose from the dead triumphantly on the third day and ascended to heaven, to his throne as the saviour, redeemer, and judge.

And he said to all, “If anyone would come after me, let him deny himself and take up his cross daily and follow me. For whoever would save his life will lose it, but whoever loses his life for my sake will save it. For what does it profit a man if he gains the whole world and loses or forfeits himself? For whoever is ashamed of me and of my words, of him will the Son of Man be ashamed when he comes in his glory and the glory of the Father and of the holy angels. But I tell you truly, there are some standing here who will not taste death until they see the kingdom of God” (Luke 9:23–27, ESV).

The cross is the distinct identity of following Christ (Luke 9:23). There is no evasion of the cross if anyone is to be a disciple of Christ, neither is there discipleship without the cross. The cross is at the center of the gospel; it is at the heart of the good news, the message of salvation. The cross was to be the end of Jesus’ ministry; it was meant to silence him by killing him to death. The conspiracy to kill him was completed. He did no wrong yet he was condemned by the forces of envy, hatred, jealousy, bitterness, slander, and betrayal. They ganged up and sentenced him to death on the cross. But on the third day, Jesus rose from the dead and is alive for evermore! That is the victory of the cross! “For the word of the cross is folly to those who are perishing, but to us who are being saved it is the power of God” (1 Corinthians 1:18, ESV). This is the reason for the gospel missions and ministry until the return of our Lord.

Throughout the years, wherever there were Christians the mission has continued, no matter what the circumstances. Now it is our turn! We must make bold to stand up now when it matters most. We are to be builders, not destroyers. We must build all people and particularly young people and give them a hope for the future. Let us rise to resist destruction and all that destroys life, environment, and community. A gospel which has no effect in peoples’ lives, which has no transforming power, is not the true or full gospel. Whatever the conditions around us, let us never forget: we have a gospel worth living for and a gospel worth dying for!

Quotations marked NRSV are from the New Revised Standard Version Bible, copyright © 1989 the Division of Christian Education of the National Council of the Churches of Christ in the United States of America. Used by permission. All rights reserved. 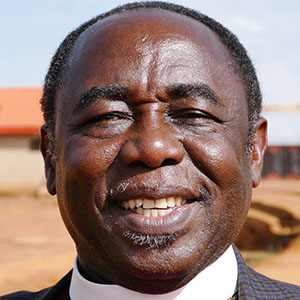 is Bishop of the Anglican Diocese of Jos, and Archbishop of the Ecclesiastical Province of Jos in the Church of Nigeria. He and his wife, Gloria, live in Jos, Plateau State, in northern Nigeria. They have six children, and they also have over 50 orphans living with them in their home. Bishop Kwashi was born in Amper village (Plateau State) in 1955. He attended the Nigerian Military School, but when he received a clear call to go into ministry, he turned his back on a military career. After ordination and marriage, he served in a variety of rural and urban parishes, and then as rector of a theological college. He was consecrated and enthroned as Bishop of Jos in 1992.