For this final Prayerline of 2021, we wanted to bring you a few updates from some of the things we prayed for this year. Read these encouragements from real student stories around the world and be refreshed in faith that God really is moving in the world’s universities. 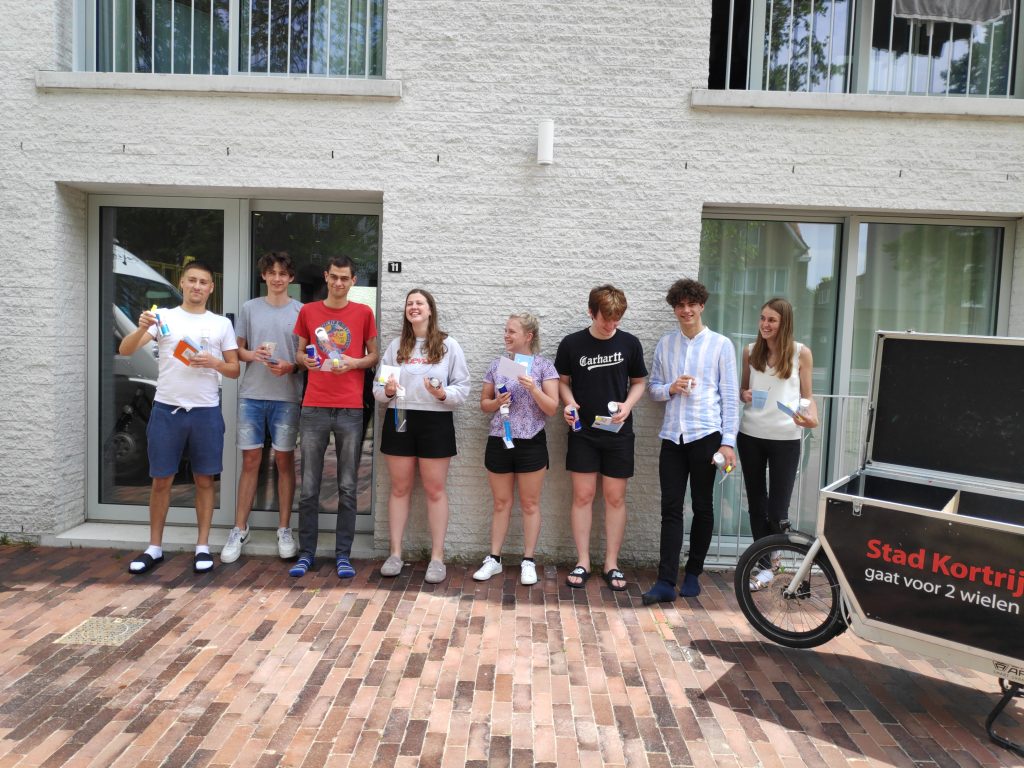 In May, we prayed for Sem and Ruth, staff workers for Ichtus Belgium in Vlaanderen, in the incredible story of their surprise collaboration with the city council to reach out to students in lockdown studying for exams. Ruth updates us below:

‘The week after this Prayerline was published the exam period started, and Sem and I once again went out to meet students. We had sent out a press note together with the city to call on the people of Kortrijk to write encouraging cards for the students. While society had opened up again, the students couldn’t enjoy it because they had to study. We had a mailbox placed in the public library and city hall, and people could drop their cards there and we would hand them out. In the end we had 250 cards, and for five weeks we took out the cargo bike to the dorms in Kortrijk. This time, other organisations gave us items to hand out in addition to the cards and our own flyers – coffee, provided by the city, and RedBull. We had markers from Teleblok, an organisation that helps students with studying, and flyers and bottles from Kzitermee, a mental health organisation for young people.

The students’ reaction when you handed them coffee, RedBull, bottles and markers was nice. But when we gave them a card from some anonymous person in Kortrijk who wanted to encourage them, they were thrilled. They were amazed that people cared about them. They were surprised that people took the time to write a card to them, and some even wanted to write a thank you card. Some cards had Biblical verses and encouragements on them. We don’t know what this did or still does in the lives of those students, but we prayed that those cards would end up with those who needed them most. We trust that God has answered our prayers, even though we will probably never know the outcome.

On our last round we saw Regis, a student we have talked to several times. When we told him it was our last round for the year he said ‘thank you for this initiative! It is such a small gesture, but it has meant very much to me’. We don’t know if he still lives in that dorm, but we hope to run into him again this year. We plan on going out again in the exam period in January, and while the Covid situation in Belgium is not good and I think another lockdown is around the corner, we will be out meeting the students where they are.

This year our Ichtus Vlaanderen team has read A Meal with Jesus. We don’t eat and drink with the students, but it is food and drink that brings us together. Regis’ parting words stuck with me. I realise that in the past year God has led us to students like Regis, and he doesn’t need big actions, big words or big events. He can meet students through a simple cup of coffee.’ 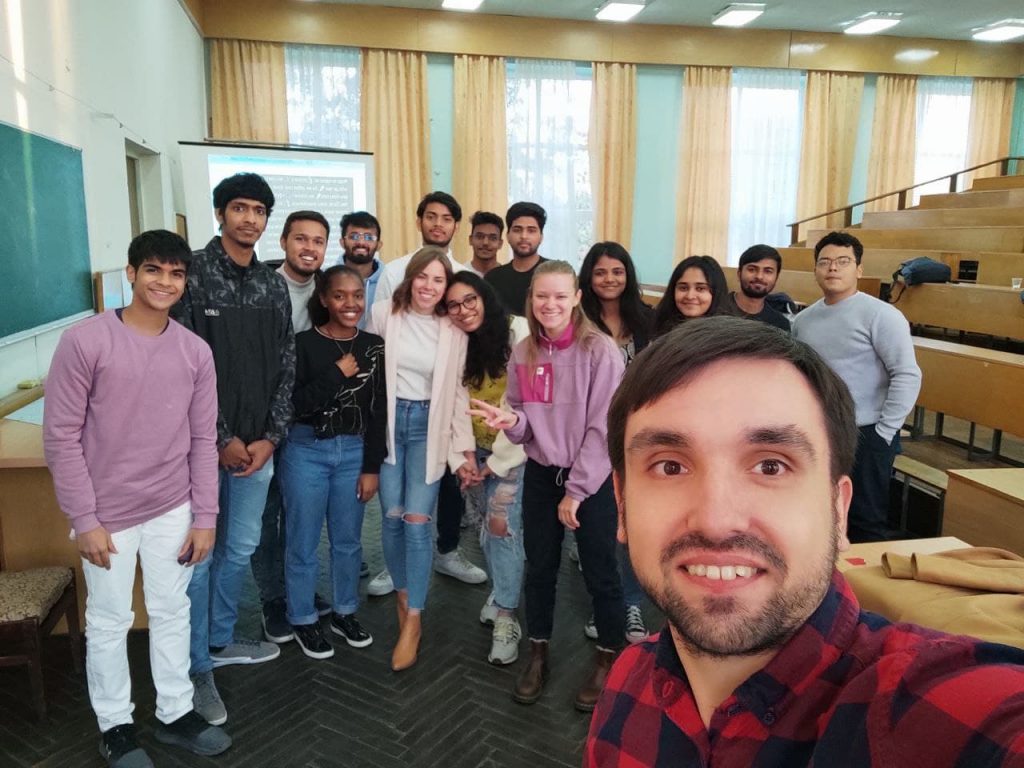 In June, we prayed for students from CCX Ukraine who experienced personal revival through meeting at a national camp to study the Bible. Sergiy Lebedev writes:

‘We had a couple of meetings after camp and almost all students who attended the camp wanted to study the Word deeper during the local meetings in Kharkiv, Kyiv, Odesa and Lviv. The internationals that were specifically touched by the content of the camp come to the English language clubs.’

Sergiy also shares the plans to continue this work in the New Year:

‘We plan to have another Mark camp at the end of January. It would be amazing if people could pray for the camp as we still lack funding – around 2000$. Please pray for this, and for restrictions not to be severe. We plan to have 150 people in one place, obviously with all of the precautions, but still there is fear that something might go wrong. Another point for prayer is that we will host a team from the US and we want everything to go smoothly with their arrival.’

In August, we heard about the amazing way God derailed staff worker Sam’s plans so that a pioneering work in Guam in the South Pacific could begin. David Walter, Regional Secretary for the South Pacific writes:

‘Guam has been one of the true highlights of IFES ministry in the South Pacific in 2021. There are now two weekly Bible studies reading John’s gospel. Two students (one who was in that first meeting of 3 students with Sam) lead a Bible study in the student dormitories which have students from across Micronesia. They regularly have 20 students attend. One of those students recently made the decision to follow Jesus, and many others are searching. Sam leads the local student Bible study (which is itself a multicultural group) which is going well. Most of the focus is on UoG (the University of Guam) but Sam is building connections with the community college (GCC – Guam Community College) and the other university on Guam (Pacific Islands University).

Sam is doing a great job connecting with pastors and other local people, helping everyone to catch the vision of how the ministry works and what God might do through it, and growing trust in the ministry and IFES. And recently, they launched Project Ambition, to encourage believers to take more initiative to speak to friends and contacts who don’t yet know about Jesus.’

We’ve prayed for the Logos & Cosmos catalysts twice over this year; in June for Nina’s explorations of possibilities for prison reform and in October for Jonas’ endeavours to reconcile science and faith. Elaine Bible from Logos & Cosmos gives us an update on where the scheme is going at the moment:

‘So far, the catalysts have taken part in three online workshops, two e-courses and journeyed together through an online training platform that connects participants from 22 countries. The goal is to equip these young leaders for projects that will foster dialogue between theology and the sciences in their universities and local contexts.

For Jonas, the Introduction to Science & Theology e-course was particularly impactful this year. He says that “the course gave me the tools to understand the relationship between my faith and academic work, and challenged me to analyze this relationship from a biblical perspective. It left me with a sense that we can meaningfully contribute as Christian scientists to our church and society. It also encouraged me to let my academic research be more inspired by the values of the kingdom of God.”

The catalysts are now on the cusp of an exciting new phase: planning their first projects. They have been conducting field research, pilot projects and consultations with their national movements. Their projects, which could include conferences, publishing initiatives and scholarly networks, will launch in Spring 2022.

While the current catalysts will apply to progress onto the second year of this five-year program in Spring, the LCI will also be accepting applications for more catalysts. Applications open on 1st February 2022.’

Thank you for praying with us and being part of the IFES fellowship this year. We look to God for his Spirit to move as we share and connect with more stories of student work around the world in 2022.

Share this:
« Previous StoryAll Prayerline StoriesNext Story »
Each week, IFES sends out a short email with stories from student movements and IFES ministry around the world to inspire your prayers.
We’d love you to join in!
IFES websites use cookies to improve your visit and collect anonymous data. By using our websites, you agree to our use of cookies.ContinuePrivacy policy