A university is a space for ideas to be explored, advanced and critiqued. It is also a space for critiquing government policies. Such critique is important for the health of liberal democracies, and it also follows the example of biblical prophets.

That there is shrinking space for free speech in Indian universities today is a sign of a withering liberal democracy. Democracy is young, shallow and fragile in most of the South Asian countries. It has been largely stable in India for the last seventy years except for the brief period of Emergency in 1977, but since the sweeping electoral victory of Narendra Modi in 2014, India’s democratic ranking among the countries of the world has slipped from 27th in 2014 to 41st  in 2018.[1] One effect of Modi’s victory is to polarise citizens who toe the government’s line of thought from those who dissent. This polarisation is sharply visible in many university campuses.

The matter gets worse when voices that critique the government are labelled as ‘anti-national’. Visual and print media that are close to the government increase the volume of this rhetoric. NGOs and news channels that criticise the government’s action are raided by income tax officials and other agencies in the name of checking for tax compliance and other excuses.

Recently the Indian government issued a circular to bring the faculties of universities funded by the Union government under the Conduct of Central Services (CCS) rules which have been regulating the conduct of the bureaucrats. The implication of such a rule is that teachers in the universities would be restricted from speaking out against government policies or actions. This measure allows the political authority to selectively target dissenting voices that cause inconvenience for those in power. The irony is that the leaders across political parties generally take pride in India’s democratic tradition and loathe being told that their deeds undermine democracy.

Lawmakers can sometimes make bad laws. Governments can sometimes frame bad policies. Sometimes, it could be an error in making judgement; other times it could be a deliberate measure to further the interest of those in power at the expense of the citizens’ freedom. This is a story that people in many parts of the world can relate to.  In 2015 the government of India demonetised 86% of the cash available in the economy. Whether it was an effective and an efficient method to curtail, say, black money will be seen in the coming years. To that end economists in the university will need to study and provide assessment of such a measure. If the negative outcome outweighs the positive, this is a lesson that the incumbent government as well as others need to bear in mind.

However, if the economists in the universities are banned from dissecting and critiquing government policies like demonetisation, there is no lesson that can be learnt from such a colossal experiment. Given the kind of monetary and social cost involved, it is too significant to leave the matter unexamined. The other equally negative aspect of gagging teachers is that it undermines the very purpose of the university. After all the university is supposed to be a space where ideas of various kinds must be allowed to contest against one another. Thus, those who see merit in demonetisation may voice their opinion and those who think otherwise may as well be allowed to voice their opinion, and the audience can make a judgment based on the merit of the arguments and conclusion arrived at.

It is reasonable if those serving in the army do not have the liberty to criticise the government policy. The chain of command in the army functions in ways that are different from that in university settings particularly when it is the ideas that are being contested. It is even understandable when the bureaucracy is not given much freedom to speak out against government policy. However, in university settings, the contest of ideas forms the bedrock of how research programmes are pursued. Whether it is in natural sciences, applied sciences, social sciences or humanities, freedom of expression is essential to pursue knowledge for human flourishing. This freedom must include the freedom to critique and challenge the government policy and opinion on various issues by even filing Public Interest Litigation (PIL). The government’s stance on human rights, wealth distribution, foreign relations, business deals and other matters must be open to criticism when it is or deemed to be unjust or harmful. Speaking truth to power is a key aspect of research programmes.

Critique of “the powers that be” in the Scriptures

In the book of Revelation chapter 18, John presents what Richard Bauckham calls one of the most forceful critiques of the Roman empire and its economic system.[2] John’s use of the picture of Babylon to critique the system of the day may be read beyond the then ungodly Roman empire. G. K. Beale argues that John’s concentration is not just on the “wicked religious-economic culture” but the church and Israel too that have compromised their godly ways to become part of the worldly system.[3] For John to be critiquing the government and its structure is not to contradict with what Paul says in Romans 13:2: “… whoever rebels against the authority is rebelling against what God has instituted, and those who do so will bring judgment on themselves.” Paul understands that rulers bear swords – or guns today – to maintain social order through punishing criminals. Putting this into perspective Nicholas Wolterstorff underlines that God given task on the rulers is to punish wrongdoers, the flipside of which is to enjoin doing good.[4] However, if rulers begin to do wrong or implement harmful measures that damage citizens’ lives or social relations, then being a good citizen of that territory would include critiquing the flawed policy or calling out the hypocrisy of those in power.

John was not located within the safe premises of the university where freedom of speech is better honoured than outside. However, for him it was a God-given task for which he critiqued the wicked economic-religious system of the day.  Our location as well as the challenges and issues we face today are different from that of John. The wickedness and the oppressive measures, however, do reappear in various shades. For example, it is becoming more common today to deify a political leader or the nation and vilify those who refuse to toe the line of the rulers. A few years back the then President of Indian Council of Cultural Relations (ICCR) and former Chairman of Indian Council of Historical Research (ICHR) spoke about Indian Prime Minister Narendra Modi as an incarnation of god, saying he was greater than Mahatma Gandhi.[5]  Economic structures that widen the inequality gap between the rich and the poor even more in the name of wealth creation are being seen. It is reported that 26 individuals own as much wealth as the 3.8 billion people who are the poorest half of the world population, while India’s richest nine individuals own as much wealth as the country’s bottom half.[6] Followers of Christ who are placed in a safer position by being in a university need to examine the government’s stances on religious liberty, healthcare policy and more and provide a measured view of the issues at hand.

We have seen in history how worshipping a political leader undermines democracy or how worshipping the nation can lead to war between nations. Discourse in the university must seek to critique such deification or quasi-deification.

In the face of a strong political leader or an oppressive state, it is risky to speak out against unjust measures or human rights violations in the name of hyper-nationalism. Incurring the wrath of the leader or the state might include being abused verbally or physically by those who disagree. It may even result in being fired from a secure job, being sent to jail or being assassinated. Someone who has a home to lose or children that may be orphaned may choose to remain submissive rather than stick out their neck and fight against such injustice.

I showed restraint in critiquing government policy while working in the staff team of UESI, the IFES movement in India. Though the organisation does nothing wrong, its members think that open criticism of government policy may invite a crackdown on its functioning. Since no organisation wants to invite the wrath of any government when it has done no wrong, staff workers prefer to maintain a safe distance from issues that are overtly political. However, now that I wear a different hat as a postdoctoral fellow in a liberal arts institution, I have more freedom to criticise public policies that I believe impede flourishing.

Waiting for another election to arrive to vote out a tyrant or a divisive political party is not enough. Unless educated individuals speak out, the less educated may remain relatively uninformed. The less educated sometimes, unlike the more educated ones, do not have adequate resources to engage critically with unjust state’s policies. The educated ones, especially those situated in the university settings, thus have a weightier obligation to speak forth truth to power.

To give allegiance to the crucified and risen Christ and not to the Caesar of the day means securing freedom, justice and equality not only for myself but also for fellow Christians and citizens in my community. Doing so is an expression of my obedience to Christ who instructed the scribe to demonstrate love for his neighbour by showing concern for the one in a helpless state.

[6]. ‘Telling Numbers: Nine Indians Own as Much as Half the Country’, The Indian Express, 22 January 2019, https://indianexpress.com/article/explained/telling-numbers-9-indians-own-as-much-as-half-the-country-oxfam-wealth-inequality-report-5549151/. 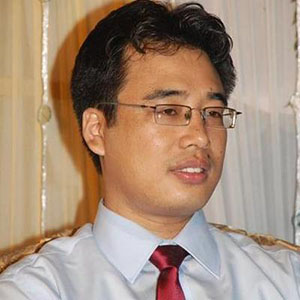 formerly worked as a staff worker of Union of Evangelical Students of India (UESI), the IFES movement in India. He earned his PhD in Philosophy from Delhi University, and is currently an Indian Council of Philosophical Research post-doctoral fellow affiliated to Delhi University. He is a member of the Executive Council, UESI Delhi Chapter. He lives in Delhi with his wife Savita, a paediatrician involved in providing palliative care to the terminally ill, and their two kids. He can be contacted at jeremiahduomai@gmail.com