As a Professor at an Australian university I have observed striking and profound changes in  universities since I was a student. Indeed in the West, authors with diverse backgrounds, perspectives, and agendas are all claiming that universities are in crisis. This is not just a crisis of funding or governance, but rather a crisis of identity, purpose, and mission.[1]

IFES recently organised six regional consultations to discuss big issues and questions in the university.[2] Participants were a mixture of IFES campus staff, university faculty, and student leaders. Some of the questions and issues were distinctly regional or national. Across the Majority World there were many common social issues such as strikes, corruption, poverty, and conflict. However, what surprised me was that the question, “What is the university for?” is being asked and debated, not just in elite institutions in the West but also in Africa, Latin America, South Asia, and the South Pacific.

Ronald Barnett, Emeritus Professor of Higher Education at the University of London, states[3]

Competing ideas include nation building, moulding good citizens, social critique and transformation, and a finishing school for the privileged elite. Here I briefly describe three other ideas and visions of the university.

This is the “entrepreneurial” university. Neoliberalism (or economic rationalism) is the view that public institutions like hospitals, universities, and energy utilities perform best if they are left to free market forces. This usually means increasing privatisation and decreasing regulation. Neoliberalism has an economic, political, and philosophical dimension.[4] In the neoliberal view, universities are essentially a business, students are customers, and faculty are human resources. Education becomes equated with students obtaining an accreditation that will lead to a job that will increase their wealth, power, and social status. The purpose of research is to produce knowledge that will be commercially valuable, to provide income to the university through overheads, and to increase the global ranking of the university, which in turn will attract more international students who will pay higher fees. The dominant four values of the neoliberal university are money, metrics, marketing, and management. Most Western universities are now dominated by management with neoliberal values, while transcendent values such as virtue, curiosity, scholarship, transformation, and collegiality are considered irrelevant or unrealistically idealistic.

Many universities like Harvard, Yale, and Princeton were founded by Christian denominations, often with the aim to educate clergy or students from a particular denomination. Students and faculty were required to assent to a particular doctrinal statement and sometimes be members of the denomination. Students who disagreed were expelled and faculty who expounded views seen to be contrary were fired. This still occurs in conservative Christian colleges in the United States today. Until the early nineteenth century only Anglicans could study and work at Cambridge. The dominance of these sectarian institutions led to the founding of secular competitors such as University College London in 1826 and Cornell University in 1865. Clearly a sectarian religious vision for universities conflicts with values such as academic freedom, universal access to education, and pluralism. These conflicts lead to the claim that Christianity should not have a voice in debates about the mission and governance of secular universities in a pluralistic society. However, this is too strong a reaction.

Mike Higton, a Professor at Durham University, presents such a vision in his book, A Theology of Higher Education. He addresses the question: “What is (or should be, or could be) good about universities?” To do this he considers “three core themes: higher education as training in intellectual virtue; the inherent sociality of university learning, reason, and knowledge; and the proper orientation of higher education towards the common good—the public good.” David F. Ford, Regius Professor of Divinity at Cambridge, argues that Christian wisdom is central to a much-needed renewal of modern universities.[5]

Both Higton and Ford base their arguments partly on an engagement with the history of universities, highlighting how Christian theology played such an influential role in the founding and flourishing of universities. Secularists might counter that this history is now irrelevant and it is best that we dispense with this historical baggage. However, there is an important question of whether this theological perspective was actually a key to the success of universities. Ford particularly focuses on the case of the founding of University of Berlin (Humboldt University) in the nineteenth century. It became the model for most European research universities. In addition to Berlin, Higton considers the emergence of the medieval University of Paris and the publication of The Idea of the University by John Henry Newman, in 1852. Although Newman was concerned with defending an exclusively Catholic university in Dublin, his book has had an influence far beyond that context and perspective. For example, in the 1990s Yale University Press published two books that reviewed Newman’s perspective and its relevance to American research universities.

It was not just elite Western institutions that were founded by Christians with a distinctly theological vision. Prior to the post-colonial era, in the non-Western world many excellent universities were founded by Christian missionaries. Examples include St. Stephen’s College (Delhi, India), Forman College (Pakistan), St. John’s University (Shanghai, China), and the American University of Beirut. The founders did not have a sectarian vision but offered a broad liberal arts education to both non-Christians and Christians.[6]

It is not necessary to be a Christian to share the values that Higton and Ford argue are particularly relevant to universities. However, I think Christian theology offers more than these humanist values. First, it makes sense of what has happened and is happening in universities. Second, Christian theology provides a redemptive vision for their future. Finally, the Gospel provides access to a transformative power for both individuals and communities to work towards this vision. In the pluralist marketplace of ideas the relevance of these theological ideas also need to be debated, particularly given their rich historical legacy.

The four theological categories of creation, fall, redemption, and renewal are particularly helpful for providing both an understanding of universities and a compelling vision of how universities can promote human flourishing.[7] I first briefly review the four categories, then consider how they were key to the emergence of modern science, arguably one of the greatest achievements associated with universities. I will then discuss how these categories are relevant to universities, more broadly.

Everything that exists was made and continues to be sustained by God through Christ. This creation is good and for the purpose of God’s glory. This creation is ordered and reflects the power and faithfulness of the Creator. Humanity is made in the image of God, and so is of immense value and shares some of God’s qualities such as rationality and relationality.

However, we do not live in God’s ideal world. Humanity rebels against God’s ideal purposes and the whole of creation has been corrupted and frustrated. Humans are in conflict with God, with each other, and with nature. Human reason and communication are corrupted.

Through the death and resurrection of Jesus Christ, all of the fallen creation has been reconciled to God and is being restored (now but not yet). Redeemed believers are motivated and empowered by the Holy Spirit to perform acts of service and mercy.

One day complete and final renewal of the creation will take place, following the final judgement. There will be complete harmony between God, humanity, and nature. Vision of this future gives hope to believers and motivates them to persevere.

These theological ideas were central to the emergence of modern science in the seventeenth century. This is carefully documented in two influential books by Professor Peter Harrison.[8] The doctrine of creation led to the view that the world was ordered and intelligible, and there were scientific laws of nature that were waiting to be discovered. The goodness of creation meant it was worthy of study, particularly as it could reveal the glory of God. The Fall was not just moral and intellectual. Human thinking is corrupted and so one needs to do experiments to learn the true nature of things. Furthermore, given human fallibility it is important to repeat experiments and different parties doing the same experiment and comparing results. The Fall limited human powers of observation and this motivated the development of new instruments such as telescopes and microscopes. God had redeemed believers morally and spiritually through Christ. Believers now had a responsible to act in redemptive ways including pursuing the study of nature.

How are these four theological themes relevant to universities? First, the notion of creation implies the goodness, orderliness, and intelligibility of every aspect of the world. It is both possible and worthwhile to study the world. Given the rationality of the Creator who is the Truth one should expect a unity and coherence to knowledge. This affirms the value of scholarship for its own sake of inter-disciplinary studies. Yet, because of the Fall, the scholarship is hard and frustrating, like weeding a garden. Given the intellectual corruption of humanity and our tendency to vanity it should not surprise us when we encounter brilliant academics promoting dubious theories (and themselves), ignoring evidence to the contrary, and viciously attacking their opponents. The redemptive mandate provides further motivation for academic pursuits, particularly those that partially reverse the effect of the Fall by healing the sick, alleviating poverty, reducing violence, and promoting peace. Finally, there is a limit to what we can achieve because we are finite creatures and live in a broken world. But a Christian academic or student can live with frustration and disappointment. This can come from experiments that don’t work, things they just can’t understand, or from meaningless and wasteful bureaucratic initiatives promoted by neoliberal university managers. A Christian can persevere with hope of a better future. They live in the “now but not yet.”

Around the world universities have a crisis of purpose. Most of the competing visions of what a university is for are impoverished and ignore the history of what shaped universities and enabled them to flourish: a Christian theological vision. Christian students and faculty and IFES staff have the opportunity to contribute significantly to debates on campus about the purpose of their university.

[1] For example, Benjamin Ginsberg, The Fall of the Faculty: The Rise of the All-Administrative University and Why It Matters (Oxford: Oxford University Press, 2011).

[6] For the case of India, see Vishal Mangalwadi, The Book that Made your World (Nashville: Thomas Nelson, 2011), chapter 12. 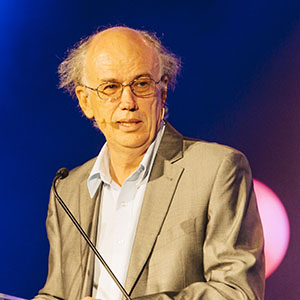 is a Professor of Physics at The University of Queensland in Brisbane, Australia. He was an undergraduate at the Australian National University and received a PhD from Princeton University. His scientific research uses quantum theory to understand the properties of complex materials. He enjoys writing two blogs: Soli Deo Gloria: Thoughts on theology, science, and culture (revelation4-11.blogspot.com) and a blog related to his scientific research at condensedconcepts.blogspot.com. He recently helped facilitate the Big Issues Project with IFES as part of the Engaging the University initiative.