I believe a university’s purpose is to explore questions and mysteries together, to create and share knowledge, to inspire new ideas, and to encourage people to maximize their potential to create a better world. I further believe that my spiritual path and philosophy of servant leadership are wholly supportive of this vision.

I didn’t start out imagining that one day I would be called to be a leader of a university. I became an academic because of my natural curiosity and passion for science. That passion and curiosity led me to an academic career in medicine and biology.

My research encompasses the immune system, eye inflammation and age-related macular degeneration – a leading cause of blindness. Early detection and treatment could reduce vision loss and allow more people to enjoy their retirement years and maintain their independence.

As I progressed in my academic career, I also began to assume administrative and leadership responsibilities, first at Emory University and then at the University of Cincinnati and now at the University of British Columbia. My own leadership style is based on a philosophy called “servant leadership.” A leader has to start from a position of humility and respect. There are all kinds of people that I work with or encounter as a university president. My style is to consider myself as their servant.

Servant leadership doesn’t mean that I don’t, at times, have to make tough decisions or assert myself, but the foundation of how I interact with people is one of mutual respect. Part of how I reach out to the least-powerful individuals in an organization or society comes from remembering what it feels like to be undervalued. The other part comes from my faith. As Jesus says in Mark 10:45: “For even the Son of Man did not come to be served, but to serve, and to give his life as a ransom for many.”

As a university president, my focus on service is agnostic of denomination or faith. It is about my responsibility for others and focusing on them. And so it’s entirely consistent with my own Christian faith that I can be supportive of all faith groups, and also of students who are still searching or have decided that there is no room for faith in their lives.

My own faith journey was a personal exploration of science and faith. I was born in Vancouver in 1962, some years after my father and mother had emigrated from Japan to North America. At the time, my father was a professor of Mathematics at UBC. My mother and father were not believers and did not practice any religion. From kindergarten through high school, I had very little concept of what happened in churches. The only times we, as a family, would enter churches would be to listen to music concerts.

My first introduction to God and Jesus occurred in my first year as a student at the University of Chicago. With the sudden freedom of living far away from home, and with no parental guidance, I partied hard and frequently drank too much on weekends. Indeed, I think part of that behaviour had to do with a deep dissatisfaction with my life deep inside my soul, but I didn’t know it at the time.

Thankfully, I had two friends who were very active in church on campus and they started to take me with them to church services and InterVarsity Christian Fellowship, the IFES movement in the United States. They also took me back home to their churches and families. I remember feeling very special when I entered these churches. I felt chills down my spine as I knelt down to pray, not understanding what that meant.

After graduating from the University of Chicago, I made my way back to Canada to be a graduate student in Experimental Medicine at McGill University. There, I met a fellow graduate student. She played the piano; I played the cello. The pianist’s name was Wendy Yip. Sometime later we would start dating, and eventually she became my wife.

Wendy took me to her church, and we would spend hours talking about why I had problems believing in God and Jesus. I had been educated as a scientist, to look for proof, and I could see no proof of the existence of God or Jesus.

After many conversations, and attending Sunday school with 11-year-old kids, and thanks to a particular pastor that worked with me, my faith emerged and grew stronger day by day. I’ll never forget the day I was baptized in Westmount Baptist Church, on a glorious, sunny Easter Day.

There was a pivotal moment when I was a Senior Vice-Provost for Academic Affairs at Emory University in Atlanta. Emory was originally a Methodist university but is now a secular, multi-faith university. I discussed the issue of faith with then-president of the university, Jim Wagner, and also with a professor that I admired greatly, Tom Flynn, a Catholic priest.

President Wagner was relatively open about his faith (he is a Presbyterian) but he reminded me that, as a senior administrator, it was important for me to respect and support staff, faculty, and students of every faith, as well as those who had decided not to believe. Professor Flynn, on the other hand, was discreet about his faith and encouraged me to be discreet about my Christianity and to be, as he said, “a stealth Christian.”

After more than a year of considering the possible options, I made a decision not to be “a stealth Christian.” In fact, I immersed myself in supporting students of all faiths at Emory University. I continued this practice at the University of Cincinnati and now at UBC, and I am not discreet about my Christianity.

Can faith and science coexist at a modern secular university? The “tension” is between science, on the one hand, which is evidence-based or proven, and faith, on the other hand, which is something that transcends human understanding. When we make the conscious decision to have a faith in a particular religion, whether based on indirect references in history or in the Bible or in some other foundational document, we take a leap of faith.

I was trained as a scientist to prove everything, to only make pronouncements about something being true because there’s empirical data that supports that view or that statement. However, one of the privileges of being a scientist, is you begin to understand the limitations of human consciousness and human conceptualization of things that transcend our ability to understand or explain or to prove.

As a scientist, the crux of my faith is learning first hand that the tremendous diversity and complexity of biodiversity exists beyond the explanation of the brightest human beings. I started my faith journey with a very closed mind, thinking that the only things that could be true are those things that could be proven. The deeper I delved in experimental science, the more I appreciated that so much that exists in this world that cannot be explained or proven. Not only did this realization open my mind, it was the pivotal force in my faith.

Through questioning our faith, I believe we become stronger individuals. A real gift of the spiritual path is you grow as an individual and your faith becomes stronger because you’re constantly asking yourself questions and perhaps sometimes doubting your decision. This is really at the heart of what it means to innovate.

Just as the best universities are spaces where people have the freedom to voice different points of view and to either change their mind or strengthen their belief based upon honest discourse, I believe the strongest churches are spaces where we work through inconsistencies or differences of opinion together, and where we acknowledge the humility of what we do not know. 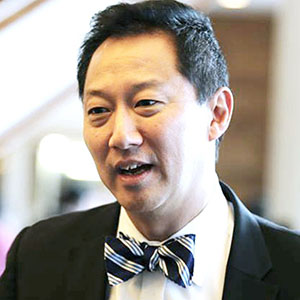 is the President and Vice-Chancellor of the University of British Columbia, a global centre for research and teaching with 64,000 students, 16,500 faculty and staff, and a $2.5 billion operating budget. He is also a professor of medicine and biology, Chief Advisor of the British Columbia Innovation Network, and a Director of Universities Canada. He is married to Gwendolyn (Wendy) Yip and the father to Juliana and Sarah Ono. The family attends Tenth Church and Origin Church in Vancouver, B.C., Canada. For many years he has been involved with InterVarsity Christian Fellowship, the IFES movement in the USA, including serving on the InterVarsity Board of Trustees and acting as faculty adviser for InterVarsity’s three chapters at Emory University. He can be contacted at presidents.office@ubc.ca