To say that understanding the historical context of a given biblical passage is important for interpretation is such a commonplace notion, that it is hardly worth dwelling upon at length. However, it is only recently that we have begun to appreciate more fully the crucial significance the context of the reader plays in that same interpretative process. Context is like the air we breathe: it is always there, we rarely think of it, and we cannot exist outside it.

It is so natural to who we are and what we do that it is usually invisible to us. Due to that semi-invisible quality, we might be under the impression our context doesn’t play a large role in our reading habits and interpretative decisions. In fact, nothing can be further from the truth. Context impacts our interpretation of the Bible more significantly than we often realize. It not only suggests to us the questions we ask but also influences the answers we come up with.

Let me illustrate this with the help of a specific example, one which is both theologically complex and practically significant. What does the Bible say about the way we should react to authority?

How we answer that question will be influenced by a number of factors. One is whether we are in possession of power.

Those who have power naturally think that power should be obeyed. Pastors are more likely to want to stress verses like Hebrews 13:17: “Have confidence in your leaders and submit to their authority, because they keep watch over you as those who must give an account” (NIV). Church members who have been victims of abusive leadership will probably look for guidance elsewhere.

Our social and political circumstances also impact our thinking. Those who live in safe, well-ordered societies, will generally regard government as something good. It provides order, security, and justice. Admittedly, these malfunction every now and then. Nevertheless, in the grand scheme of things the benefits far outweigh the occasional flaws.

Obedience to authority in such contexts is tantamount to furthering the common good. Disobedience leads to disruption and chaos. Therefore, it is natural for Christians from such communities to go to passages like Romans 13:1–7 when discussing their attitudes to authority.

Within modern-day liberal democratic societies, for example, Paul’s advice here makes perfect sense.* However, not all societies are democratic and liberal. There are oppressive and evil governments. Not all rulers are “terror to bad conduct”, some of them are “bad conduct” par excellence. In many situations the advice: “Do you wish to have no fear of the authority? Then do what is good, and you will receive its approval” is not going to work. How does one read the Bible in such contexts?

One of the passages that afford guidance on the subject is the first chapter of the book of Exodus (1:15–21). Pharaoh orders the Hebrew midwives to kill all male children born to the people of Israel and to let only the girls live. In Egyptian thinking Pharaoh was not just the king, but the mediator between the human and the divine spheres. He was responsible for maintaining the order of the created world. Disobedience to his authority was an act of ultimate evil because it constituted a blow against the very fabric of creation (a bit like modern-day treason, but with cosmic consequences attached).

The midwives disregard the royal command and let the male children live. When summoned by the king and questioned about their behavior, they do not confess openly their unwillingness to comply. Instead they create the impression they strive in good conscience to carry out the deadly royal injunction, but are prevented from doing so by the Hebrew women. The women have already given birth by the time the midwives arrive on the scene, making the murderous act impossible. So the midwives not only disobey their government but also use deception to conceal their disobedience and escape the consequences. To put it starkly, they commit a crime and then lie to cover it up.

For this they are congratulated by the narrative and blessed by God himself: “because the midwives feared God he gave them families” (1:21).

Many people live in the contexts where the story of the midwives will be a lot more helpful in shaping their attitude and responses to authority than Paul’s advice in Romans. Context not only suggests the questions we ask of the Bible but also guides the answers we get from it.

There are practical implications of all this for a fellowship, such as IFES. A global Christian network like ours facilitates the exchange of experience, ideas, and teaching across borders and continents. This in and of itself is enormously enriching and inspiring. Yet it comes with its own particular challenges. A biblical reading born and bred in one context does not always connect to or translate well in another. Sometimes it can impose upon Christians from other places attitudes and ideas that are not simply irrelevant, but positively harmful. Contextually conditioned interpretations elevated to the status of universal truths do not build up and strengthen the Church.*

The difficulty is that our context is like the air we breathe. We do not see it and often do not factor it in. That is why it is so easy for us to assume that what is right in our own context must be right in every context. To us it appears natural, self-evident. What is natural for us is not necessarily natural for others. Learning to read the Bible aware of our context poses before us the dual challenge of humility and caution: humility, so that we do not arrogantly presume our opinions to be automatically applicable to all, and caution, so that we do not accept uncritically all the stuff that comes to us from other lands and exotic places.

The Bible and political authority

Charlie Hadjiev says that our political context shapes how we read passages of Scripture that deal with authority.

[1] The Roman Empire, of course, was not a modern democratic society. For the purposes of this paper, however, I will have to leave aside the question, important as it is, of the original, historical meaning of this passage. Was Paul giving universally valid advice on the subject or simply guidance bound to the particular historical situation of his first readers?

[2] I do not want to give the impression that every single reading is so contextually bound that it has no capacity to transcend its context and speak to other cultures. To go down that road would be as extreme as claiming all your contextual teachings as universally applicable. Within the space of this paper, however, it is not possible to explore further the complexity of this dilemma. 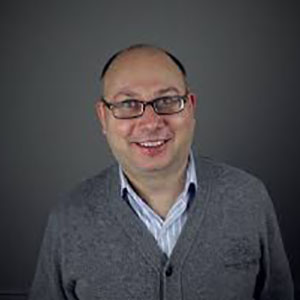 is originally from Bulgaria. He studied law in Sofia and theology in London and completed a doctorate in Hebrew Studies at Oxford. He worked for seven years as a staff worker and General Secretary of the IFES student movement in Bulgaria (BXCC) and subsequently as an Associate Regional Secretary with IFES Europe. He is currently a lecturer in Old Testament at Belfast Bible College and continues to be a member of the regional team of IFES Europe.