During my first years at university I started to read the Bible and explore Christianity. Back then there were two things – possibly a bit extreme – that defined my life: my faith and my hope. I started attending a church and in that context some seeds were inadvertently being planted in my mind and invaded my thoughts. Now, looking back, I realise that they were the seeds of pessimistic theology. These seeds float around the fields of the Protestant evangelical culture and they usually grow when they fall on extremely cold and selfish soil.

One of the things that defines pessimistic theology is its lack of hope for this world. Although it does recognise the glory of eternal life, it has nothing to offer today to a wounded creation. This melancholic way of thinking is one of the main reasons for the current lack of environmental and social awareness in evangelical Christian churches.

During World War I some theologians introduced the premillennial theory in churches. Based on that theory they developed ideas that became deeply entrenched, like the view of the current “bad world” that is beyond repair and cannot be improved, and the idea that the world will gradually get worse and worse in terms of ecology, politics, society, economy and moral issues until Jesus returns. So the idea is that if the world continues to deteriorate and only Jesus will restore it when he comes again, what is the point of trying to improve society right now? What is the point of caring for a world that is going to be gradually destroyed until the end comes?

It is amazing how such an utterly absurd theory that goes against the Bible and against Jesus’ message of hope can emerge from the church and affect Christian believers so much. It is very worrying that the people who were once known as the “people of hope” have been filled with pessimism, disillusionment and despair. But it is even worse that we actually find ourselves coming up with theology that supports this pessimism.

In ABUA (Asociación Bíblica Universitaria Argentina), the IFES movement in Argentina, for some time now we have been working and giving training on the topic of how Christian students should engage with society. A few years ago, former student Ezequiel Deleu (now an architect) took part in the “Caring for Creation” workshop, and this drastically changed the course of his career. Ezequiel has said many times that studying the theology of hope more in depth gave him the final boost he needed to start up his own company, Micromundo, a successful startup that aims to “bring nature to the city”. With green roofs, living frames, vertical gardens and natural pools, he aims to reconnect citizens with nature, because God’s invisible qualities – his eternal power and divine nature – have been clearly seen, being understood from what has been made (Romans 1:20). This is simply one example of how continuing to hope that God’s Word has the power to transform lives and the reality of the world can give us ideas to serve God’s kingdom through our careers, and  show us how to resist pessimistic theology. If we stop believing something is possible, we will just stop trying.

Pessimistic theology goes completely against Jesus’ message in the synoptic Gospels, because it contradicts the most important theme in his teachings: the kingdom of heaven, or the kingdom of God. Jesus says, “What shall we say the kingdom of God is like, or what parable shall we use to describe it? It is like a mustard seed, which is the smallest of all seeds on earth. Yet when planted, it grows and becomes the largest of all garden plants, with such big branches that the birds can perch in its shade” (Mark 4:30-32). He tells us God’s kingdom is constantly growing, unstoppable. It is a kingdom that does not start with much but that gradually gets larger until it becomes huge and takes over everything as it expands. That is why he also compares it to yeast – “The kingdom of heaven is like yeast that a woman took and mixed into about thirty kilograms of flour until it worked all through the dough” (Matthew 13:33).

So those of us who believe that the kingdom of God is growing here and now, on earth, instead of preaching pessimism, must live with hope and try to make our world cleaner, fight the extinction of species, and create a society that extracts natural resources sustainably, for everyone’s benefit.

When I talk to people who defend pessimistic theology, they usually say, “The Bible says everything will get worse,” but when I ask them to show me where the Bible says this exactly, they do not know how to answer. This is very serious and we could almost consider it to be a blasphemy because they are claiming that the Bible says something it does not, just to justify a comfortable and passive way of life.

The history of humanity, however, shows us that in the past 2,000 years, societies have been through cycles of destruction and reconstruction, so today’s signs of environmental or moral destruction are not valid prophetic signs. We must not forget how Christians in the past brought about positive change in their societies, like ending slavery, fighting racism and such.

Something else that defenders of pessimistic theology claim, is the idea that “Christ is returning soon and the whole creation will be destroyed.” So, why should Christians care for the environment if Jesus is coming soon and will destroy it all? This idea is even more dangerous than the first one because whoever maintains it is a false prophet. I dare to say this because Jesus was very clear: “But about that day or hour no one knows, not even the angels in heaven, nor the Son, but only the Father” (Matthew 24:36). So if no one knows when he is coming again, how can some Christians claim they do and use this supposed prophetic knowledge to justify their total apathy when it comes to caring for creation? We should not listen to these false prophets of our time, because as children of God we must be prepared and live as if Jesus were to return today, and never use this idea to support our defeatism and laziness.

If Jesus says that no one knows when the end will come, what shall we do if God has determined that the human race should live in this world another 100,000 years? What shall we do as humans to survive in the meantime? And I wonder, when Jesus asks whether when he comes he will find faith on earth (Luke 18:8), does he mean that when he comes he will find only a handful of people with faith or just no people?

In short, the fact that Jesus is coming again soon must encourage us to lead a godly life that is completely dedicated to caring for his creation and expanding his kingdom. We should not use it as an excuse for neglecting these issues.

We must abandon this pessimistic theology that focuses on the destruction of this world, and instead we should adopt a theology that expects God’s perfect redemption, because “the creation itself will be liberated from its bondage to decay and brought into the freedom and glory of the children of God” (Romans 8:21). We must stop looking at the world without hope and start seeing it for what it really is.

Let’s promote a theology of hope that talks about justice in economy, politics and society, in harmony with ecology and that fights to free all people and creation. A theology of hope will help us to share a more comprehensive gospel message and make a more radical commitment as Christians. The church will no longer be merely a religious institution and will become a true champion of the kingdom of God. The hope that we have as children of God towards creation is stronger than any pessimistic theology and we must make it a reality in our ministries, jobs and during the handful of years we spend as university students. Let’s get rid of pessimistic theologies and fly the flags of hope that citizens of the kingdom of God have flown for so long! God’s people have to be once again the hope that creation as a whole needs! 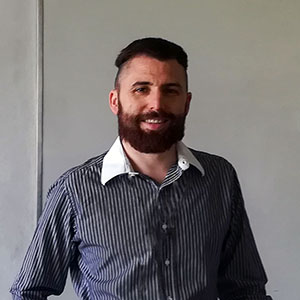 is an Information Systems Engineer and lecturer and researcher at the National Technological University, specialising in Artificial Intelligence. He discovered a passion for nature through insect macro photography. He and his wife have their own vegetable garden. He gives training and is a member of the Board of ABUA (Asociación Bíblica Universitaria Argentina), the IFES movement in Argentina. He can be contacted at pabloxor@hotmail.com