The issue of migration has turned into an intractable crisis that threatens the European Union’s very existence. It has already seriously undermined the Schengen Treaty as several EU countries resumed border controls. People in Europe (including Christians) are divided over this ‘hot-potato’. Some show welcome and support for migrants while others are deeply hostile to this covert Islamic ‘invasion’.

Heimburger’s paper ‘Migration through the eyes of faith: God’s people, national lands, and universities’ has the merit of addressing this issue from a biblical perspective. It looks at two key texts the author rightfully puts in parallel; that is, Deuteronomy 10 (vv. 12–22) and 1 Peter (1:1, 17; 2:4–5, 9–11). Just as God’s Old Testament people are depicted as a migrant people, so are God’s New Testament people (i.e. the Church). To the extent that God has promised to be with them during their exodus from Egypt to Canaan (Deut. 1:31–33), God himself is described also as ‘a migrant God’. The divine presence with immigrants finds its fulfilment in Jesus who identifies with them to the point of saying: ‘I was a stranger and you invited me in’ (Mat. 25:35).

The people of Israel were called to love the non-Jews living among them for three main reasons: theological — God loves the immigrants; historic — the Israelites were themselves immigrants in Egypt; and moral — strangers are among the most vulnerable inhabitants of the land. All this is wonderfully captured in Deuteronomy 10: ‘He defends the cause of the fatherless and the widow, and loves the foreigner residing among you, giving them food and clothing. And you are to love those who are foreigners, for you yourselves were foreigners in Egypt’ (vv. 18–19). The Israelites are expected to love the strangers in practical ways for it is through them that God provides them with ‘food and clothing’. Loving migrants also means, among other things, respecting their rights, applying the same laws to them as to the Israelites, and inviting them to share in their religious festivals.* God’s requirements to care for the strangers and to treat them justly are such that his judgment against the Israelites is motivated by their exploitation of the weakest members of society. He will himself testify ‘against those who defraud labourers of their wages, who oppress the widows and the fatherless, and deprive the foreigners among you of justice’ (Mal. 3:5).

The paper does not go as far as to suggest that God accompanies today’s migrants, most of whom are Muslims. But just as God’s love for the migrants has nothing to do with their ethnic or religious identity, it is safe to believe that God loves nowadays migrants to the point of being present with them on their often life-threatening journey. Israel’s exodus from Egypt, though unique in its character, did not mean God let down other peoples: ‘Are not you Israelites the same to me as the Cushites?’ declares the Lord. ‘Did I not bring Israel up from Egypt, the Philistines from Caphtor and the Arameans from Kir?’ (Amos 9:7).

We need to ask the question about what God might have on his agenda through this unprecedented wave of Muslim peaceful migration to largely secular and historically Christian-rooted Europe. Does he intend to shake European traditions, cultures and politics? Has he started a spiritual revolution in ‘the House of Islam’? Is he challenging the Church to implement the command about loving our neighbour as ourselves, wonderfully illustrated by Jesus in his parable about the Good Samaritan? Rather than avoiding the religious question behind today’s migration, it is critical that Europeans in general and Christians in particular address this issue head-on and take a fresh (and biblical) approach to Islam and Muslims. This is likely going to be a strenuous endeavour as Islam is often associated with terrorism in the mind of many ignorant and often prejudiced people. This misperception of Islam is understandable, as it reflects the media legitimate focus on exceptional and dramatic events such as the violent actions of the so-called Islamic State and other terrorist groups. However, this distorted image of the world’s second largest religion does not take on board its mainstream teaching or the vast majority of its followers.

The migration crisis raises other controversial and sensitive issues. Should illegal migrants be returned to their home countries unless they are genuine refugees? And what about economic migrants: should they be deported even if they come from the world’s poorest countries? Is it fair for host countries to define their migration policy on the basis of their selfish needs for skilful workers and successful businessmen, or worse on the ground of people’s ethnic and religious background? Do Europe and the US have any responsibility in this crisis due to their foolish foreign policy in the Middle East and beyond (especially in Afghanistan, Iraq, Israel and Syria)? Should they be held accountable because of their predominant role in the unjust world economic order that cripples the poorest countries in the majority world?

University students have many opportunities to engage with and befriend fellow students from all over the world. Students are assumed to be less suspicious of foreigners, less fearful of the unknown and more open to critical thinking. Will Christian students, because they fellow Christ and his teaching, take the lead in turning the migration crisis (with all its implications) into new opportunities for reaching out to international students who live at their doorstep? Will they demonstrate that God’s love is for everyone, including foreigners, ‘for God does not show favouritism’ (Rom. 2:11)?

All Scripture quotations are from the Holy Bible, New International Version® (NIV®) copyright ©1973, 1978, 1984, 2011 by Biblica, Inc.® Used by permission. All rights reserved worldwide. © IFES 2016. Published under a Creative Commons (Attributions — No Derivatives) licence.

Migrants and the university

Readings:  A brief history of your university or statistics on the origins of its students; Nigel Biggar, “What Are Universities For?,” Standpoint, August 2010

Works on migration written for a general audience by scholars in the evangelical tradition include the following. The authors vary in their conclusions:

Other works on migration and theology, from the evangelical tradition and other Christian traditions, whether popular or academic, include: 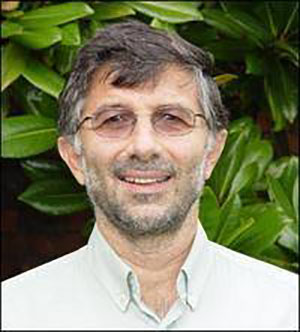 is a Christian Arab from Syria. He lives in the UK and works for World Vision (a Christian development and relief organisation) as an interfaith specialist. From 1980–1992 he worked for IFES in France among international students. He authored several books and articles including The Search for Forgiveness. Pardon and Punishment in Islam and Christianity (IVP, 2004).