Translated from the Spanish by Ellie Monteiro and Robert W. Heimburger

In this brief article I seek to demonstrate that witness, creation, and mission are closely linked concepts that inter-relate and intertwine in the teaching of both the Old and New Testaments. I will deal with these topics in the following order: 1) a semantic analysis of the term “witness”; 2) the relationship of witness, creation, and mission; and 3) the social and political responsibilities that witness entails.

1. A semantic analysis of the term “witness”

The term “witness” is used in a range of contexts: on the one hand it can be used for legal processes, where the intervention of third parties is necessary to help judges make correct and fair decisions. In this context, the testimonies of the conflicting parties (the plaintiff and the defendant) are not likely to be conclusive. Each will speak from their own perspective, pursuing their own interests. In this context, the presence of witnesses is essential in determining the truth. Regarding the legal meaning of the term, Manuel Ossorio states that “the term has importance in the area of judicial procedure since testimony is a means to check the veracity of the facts that are debated in a trial or criminal case.”[1]

In Old Testament jurisprudence, a witness (‘et-‘ud) was required to be trustworthy without any doubt or suspicion. It was expressly forbidden for the individual to be ‘et hamas, a false witness, behaving like the wicked (Exodus 23:1). Due to legal provisions, a witness was committed to the emeth (truth), and so they could not testify falsely at court. The author of the Book of Proverbs echoes this provision, signalling the trustworthy character of the ideal witness when he states that “an honest witness does not deceive, but a false witness pours out lies” (Prov 14:5, NIV). In the literary work Salamina, Javier Negrete places the following statement in the mouth of Phoenix the Grammarian, Themistocles’s professor: “Truth is the cornerstone of virtue.”[2] Negrete stresses the role of truth when the professor teaches students that “not even the gods escape the obligation of telling the truth.”[3] These statements summarize the essence of the truthful witness.

The forensic character of witness is further confirmed by Harrison, who explains that “in antiquity like today, this was a legal term that designated the testimony given for or against someone in court.”[4] It is also used as a technical term within Christianity. In this context, the term means “the testimony given by Christian witnesses about Christ and his saving power.”[5]

The concept arises within biblical semantics expressed through the Hebrew term (‘et –‘ud) and the Greek expression martyr. Both words mean witness.

The appearance of the word ‘ud 44 times in the Old Testament displays the richness and importance of both words. In the New Testament, the concept appears in five different forms: a) the adjective mártir-mártys (witness, confessor of the faith), 35 times; b) the noun martyría (testimony, evidence), 33 times; c) the noun martyrion (proof, praise), 20 times; d) the verb martyréo (attest, testify), 76 times, and e) the verb martyromai (affirm, call as witness, witness), 5 times.

In this brief work, I will address the Judeo-Christian meaning of the term “witness,” beginning with a vision of witness in the context of creation and mission.

One of the primary truths we need to know about God has to do with mission. All the acts of God in history are salvific, characterised by his grace, love, mercy, goodness, and justice. God is a missionary being who makes himself known both in the universe and in eternity. Since the creation of the cosmos, God has acted as a missionary and will continue to do so as long as the universe exists. His mission is an act of salvation. God’s great mission is to save and restore for himself his creation that was alienated by sin.

God advances his missionary action through mediators; he uses agents who are responsible for carrying out the mission. Intervening in this evangelising act are the Trinity as well as the angels who are God’s emissaries, taking his message to specific people and executing certain plans. In a decisive and committed way, his holy people also intervene.

God’s project of salvation and his creation are inseparably intertwined, since his project of salvation involves the creation and the creation presupposes his mission. Within this order of ideas, the Bible considers creation from three different perspectives: as res creatio, res escatologica, and res misiologica. As res creatio, creation is presented as a sovereign, free and loving act of God, without any pre-existing material. For this reason, in theology we affirm creatio ex nihilo, which means that at the beginning of time and before the beginning of time God alone existed, and outside of him there was only absolute inexistence.

When we speak about God and creation, we always face a paradox which takes us to the limits of human reasoning. Our human reasoning is not capable of explaining what it is to be God, and it cannot do so due to our inherent limitations.

According to Pauline theology, creation makes two of God’s qualities visible: his eternal power and his deity. In other words, creation is transparent to God’s being, as Psalm 19:1 says: “The heavens declare the glory of God; the skies proclaim the work of his hands” (NIV). According to this Psalm, the heavens play the role of proclaiming God’s glory. The psalmist assigns the sidereal realm a special mission: to proclaim to whomever is watching the hidden being of God through the manifestation of his glory. The glory of God is the visible manifestation of his hidden being. Habakkuk says: “His glory covered the heavens and his praise filled the earth” (3:3b, NIV). In Yahweh’s claim against the people of Israel, God makes use of a prosopopoeia and calls the heavens (hash-shamayim) and the earth (ha-arets) as witnesses against his people (Deuteronomy 4:25–26). In this case, the heavens and the earth are incorruptible witnesses that stand on the side of truth and justice. The firmament is thus a kind of preacher, declaring to humanity that both the heavens themselves and everything enveloped by them proceed from Elohim’s hands. Thus, the heavens and the earth, indeed the entire cosmos, are witnesses (ed-‘ud) of God’s existence, power and majesty.

The theological meaning of creation arises both from an understanding of the arché (source) of all material existence and from an eschatological perspective, in which creation is brought to completion and all material existence is transformed. According to the Letter to the Ephesians, creation is brought to fulfilment when it exalts God’s glory. God has created us so that we worship him and submit to his sovereignty. He has created us for the praise of the glory of the ineffable Trinity. Creation exists by him, in him, and for him, by him it will be transformed and recreated. In this sense, creation is God’s witness (ed-‘ud-martyr).

As the owner of the earth (Psalm 24:1–2), God loaned it to us so that we could live here responsibly. Thus we live in a planet that we don’t own, loaned to humanity so that on it we fulfil the project of salvation that God has delegated to our species.

The redemption achieved by Christ does not only apply to humanity, but it has a universal scope since the entire creation benefits from it. The Apostle Paul confirms this truth in Romans 8:18–23. The world will be recreated for God’s glory and honour. To this end, the Holy Spirit is making a tremendous effort to bring creation back to the perfection ordered by God.

Thus, the salvation offered by Christ will also redeem the entire creation. This means that nature will no longer suffer the effects of sin and it will be freed from destructibility. When Paul speaks about the corruption of creation, he is not speaking of moral, ethical, and spiritual ruin but of the destructibility and deterioration of nature. The cosmic recreation will imply the perfecting of nature. We have been appointed as Christ’s witnesses of this deep and impacting truth.

There is one more matter I wish to address: there is a solemn and sublime Christological reference in the reality that the terms “witness” and “testimony” evoke. In the servant’s poems, Isaiah addresses this issue. The shoot of the house of Jesse is appointed as witness to the nations about Yahweh’s portents and about his project of salvation (Is 55:4). From the Exodus onward, the entire history of Israel is a powerful testimony of God’s project of salvation. This is why God declares to his people as a Yahwist society and a precursor of the Messiah that they are his witnesses (Is 43:10; 44:8). Most of the texts in the New Testament that allude to the concepts of witness, witnessing, and testimony are highly Christological: the Church is the indubitable, reliable witness of Christ. Jesus himself gave the church a vocation when he entrusted her with the Great Commission (Matthew 28:18–20; Acts 1:8). The community of the saints is Christ’s witness and testifies throughout the earth.

Today, witnesses of the Lord Jesus have the prophetic responsibility of promoting and defending the business of the King in various social, political, and economic spaces. Witnesses must intervene as prophets in violent contexts, exhorting aggressors and creating within them an awareness of their responsibility and social commitments so they might cease their violent actions against the weak. They must intervene as prophets so that various governments protect their citizens from violent acts, both internal and external, and commit to seeking the common good. They must intervene to protect and claim rights and goods that have been expropriated from communities that are vulnerable or have been displaced by violence. As contemporary prophets, with respect to these three groups (states, victims, and aggressors), witnesses of Jesus Christ must have as their top priority the proclamation of the gospel of the kingdom that includes the elements stated here.

Many of the churches of Christ in Colombia have worked strenuously and courageously among these three groups (states, victims, and aggressors) to promote conditions of justice, forgiveness, and reconciliation among the conflicting parties. With this purpose, they have ministered in prisons, through church organisations, through theological institutions, and through churches turned into sanctuaries of peace. Restorative communities have been created. Processes of evangelism, discipleship, and mercy missions have been used to make possible reconciling encounters between victims and aggressors. At the same time, they have made the Colombian government aware of its responsibility in propagating conflict, whether by action or omission. In a Colombia of armed conflict, the church of Christ has been a reliable and faithful witness.

All Scripture quotations are from the Holy Bible, New International Version® (NIV®) Copyright © 1986, 1999, 2015 by Biblica, Inc.® Used by permission. All rights reserved worldwide. 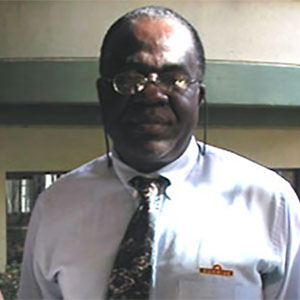 is a philosopher who holds bachelor’s degrees in theology and philosophy, a master’s degree in theology, and a doctorate in political philosophy (civil and canonical), graduating magna cum laude from the Universidad Pontificia Bolivariana of Medellín in Colombia. He is a former constituent of the Constituent Assembly of the Department of Antioquia, Emeritus Professor at the Biblical Seminary of Colombia (FUSBC), and the author of seven books combining philosophy, theology, and biblical studies. Two of these relate to the theme of this article: Exposición de Efesios (An exposition of Ephesians) and Utopía, ética y esperanza (Utopia, ethics, and hope). He is married and has one son and two grandchildren.